In some uncommon cases, a home with high levels of iron or manganese levels in the groundwater around a foundation will support the growth of an organism known as iron bacteria.

This bacteria creates a substance known as iron ochre which is not known to be a health hazard but can quickly clog up in a basement drain. It also gives off a foul odor and leaves rust-colored stains on whatever it touches.

Our WaterGuard® IOS (Iron Ochre System) Drain Channel is the ideal way to manage this troublesome problem. Its wide-open drain resists clogs, while a removable lid makes access to the drain system easy.

Advantages To Our System:

Get a Free Estimate 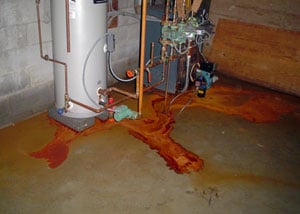 Iron ochre is typically rust-colored, but can also be yellow, brown, or gray. This slimy, gelatinous material will stain nearly any surface it touches.

What Is Iron Ochre & Iron Bacteria?

Iron ochre will stain anything it touches, give off a swampy, musty smell, and ruin the taste of drinking water. The stains can also show up on laundry if the line contains iron-ochre tainted water.

Iron ochre buildup will attach to the inside of pipes, forming layers of reddish sludge. Over time, these layers will completely block the pipes, and can even lead to the breakdown of the pipes themselves, as the bacteria uses the iron of the pipes as a mineral source.

We have solutions for even the most challenging issues with wet basements -- including problems related to iron ochre and iron bacteria. Our drain system is custom-designed to handle this unique situation -- and is the ONLY cleanable, flushable iron ochre system of its kind!

If you would like a free basement waterproofing estimate, to solve this or any other wet basement problem, contact us today! We have a locally owned and operated in your dealer that's standing by to help you!

We're proud to have dealers serving throughout Canada and the United States.