get a free estimate
Home»Basement»Waterproofing»Problems»Iron Bacteria...

What Iron Ochre Is, How It's Caused, And How To Handle It 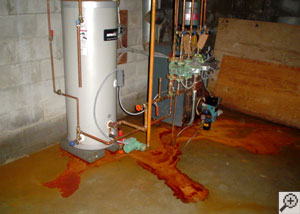 Iron bacteria produces a sticky slime that is typically rusty in color but may be yellow, brown, or gray.

Occasionally, a Basement Systems dealer will hear from a homeowner who has discovered an unusual rust-colored substance oozing into their basement, in their toilet water tanks, around faucets, or within other plumbing.

This substance is caused by iron bacteria, and is also sometimes called iron ochre. This bacteria is a natural part of the environment in most parts of the world, and is especially present in Canada.

Iron bacteria survives by oxidizing dissolved minerals from water, including ferrous iron (common) and manganese (rare). As a result, this bacteria creates a reddish-brown gelatinous slime. In more severe cases, this slime will can be very thick.

Because this slime is known to affect drainage systems of all kinds, it presents unique challenges when waterproofing a basement.

Get a Free EstimateYour local Basement Systems dealer can install a drainage system that's custom-designed for your unique situation. Our goal is to keep your basement dry -- permanently! 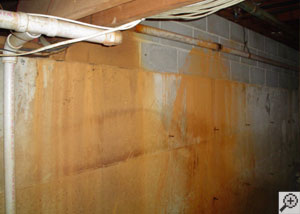 While there are many different techniques being used by contractors today, the Idaho Water Resources Research Institute reports that iron bacteria is almost impossible to completely eliminate. Corrective actions can cost thousands of dollars, and are usually short-term solutions.

Special chemicals can be purchased to remove these stains, but the damage can reappear quickly as new iron-ochre-laden water washes over the surfaces.

How Does Iron Bacteria Affect You?

Iron bacteria has many negative effects, the worst of which is damage to your pipes and drainage.

Stains: Iron ochre will stain anything it touches, including laundry, sinks, tubs, and faucets.

Because concrete is porous and absorbs moisture, stains on concrete will be especially difficult to remove.

Smell: The scent of iron bacteria is unpleasant, and is often described as swampy, oily, musty, or like sewage. Some homeowners have also compared the scent to rotten vegetation or even cucumber.

Iron ochre will also increase your chances of sulfur bacteria infestation, which smells like rotten eggs.

Taste: As iron ochre bacteria dies, it will foul the taste of drinking water.

It's also important to note that while iron ochre itself will not negatively impact your health, the bacteria adds organic content to the water, which may support the growth of other bacteria.

When iron ochre is growing in pipes, it attaches to the sides, forming in layers of reddish sludge or slime. This slime will build up on the ends of faucets, on the screens of laundry machines, and on the insides of pumps, tanks, and plumbing.

If the bacteria is allowed to build up thickly enough, it will also corrode the pipes and plumbing equipment -- including stainless steel surfaces, which are used by the bacteria as a source of iron.

As the bacteria builds up in thick layers, large chunks of it will begin to break off, potentially clogging the system. In the right conditions, iron bacteria can grow quickly, and has been known to clog an entire well system in just a few months.

If you're not sure if your wet basement problem is connected to iron ochre, try this simple test. In the morning (when the pipes have had a while to sit without being used) take a glass and fill it with water. Let the sample sit quietly, allowing any discoloration to occur, and for sediments to settle on the bottom of the glass.

Iron bacteria thrives best when the soils around your home are sandy, or are high in organic material. They tend to grow least well in loamy and/or clay soils. A study conducted by the University of Florida has found that less than 10% of drainage installations are affected. 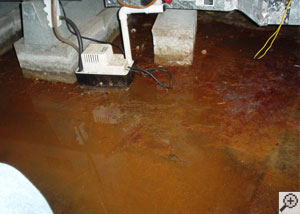 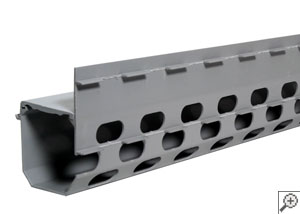 (Top) Iron Ochre is an ugly, gelatinous slime that stains surfaces and releases a foul odor into the air.

(Bottom) Our WaterGuard® IOS™ System is specialized for draining iron-ochre-laden water in basements.

If your home is experiencing an issue with iron ochre, ask your local Basement Systems dealer about our WaterGuard® IOS™ (Iron Ochre System).

This is a unique waterproofing system that's specifically designed to meet the needs of homeowners who has an iron ochre problem in their basement and would like to waterproof their home.

In a home with iron bacteria problems, clogging basement drainage systems may present a problem to your waterproofing system's ability to function.

The WaterGuard® IOS System™ is installed so that the removable cover is flush with the floor, instead of being installed underneath the concrete like other drainage systems.

During maintenance visits, your waterproofing technician can remove the cover of your drainage system, gaining access to either scoop out or flush out any iron ochre obstructions in your system.

Maintenance intervals would vary on a home-by-home basis, depending on how severe the iron bacteria problems are.

We Have The Proven Waterproofing System For Iron Bacteria Issues!

WaterGuard® IOS™ is the ONLY cleanable, flushable iron ochre system of its kind -- perfect for a homeowner with iron ochre issues!

If you'd like to know more about how your local Basement Systems dealer can help you waterproof your basement, call or e-mail us today. We offer free, no-obligation basement waterproofing estimates throughout Canada and the United States.

Get a Free EstimateRelated Pages