get a free estimate
Home»Basement»Waterproofing»Problems»Sump Pump Problems...»The Pump's Not Running!...

What Causes A Sump Pump System To Stop Running 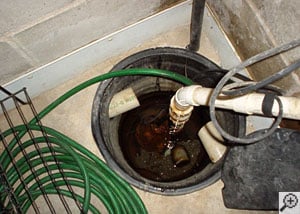 Sump pumps can fail to turn on for a variety or reasons, including clogs in the system, a power failure, and an issue with your pump's float switch.

Our full-time waterproofing service department will occasionally get calls from homeowners who has a sump pump system installed that will not turn on.

The sump pump is the heart of your basement waterproofing system -- without it, there is no way for the water collected by your perimeter drain to exit the home.

At Basement Systems, our dealers take special care to build redundancy into your sump pump system, so that you always have extra protection if one sump pump fails.

We recommend installing a primary sump pump, a powerful secondary sump pump, and a battery backup pump system in your home. This will protect you from all the primary reasons for sump pump failure -- including mechanical failure of the sump pump, overwhelming water volumes, and power outages.

Get a Free EstimateAt Basement Systems, our dealers have the equipment, experience, and professional training you need to create dry, usable space in your basement. Our award-winning sump pumps and warrantied drainage systems can help you make your basement dry all the time!

To hear more about our top-quality sump pump systems, contact us today for a free sump pump installation estimate!

Why Sump Pump Systems Fail To Turn On

When a sump pump system fails to turn on, a flooded basement is not far away. And while knowing the cause of your issue is an important step to solving the problem, the best defense against a failing system is to install a high-quality sump pump to begin with.

At Basement Systems, we recommend installing a submersible, cast-iron sump pump, with a secondary sump pump and a battery backup system. Submersible pumps are self-cooling, and the cast-iron design will last the longest in your home. A well-designed system with backups in place will minimize the chance of failure and help to ensure a dry basement.

The four major causes of this type of sump pump problem include the following: 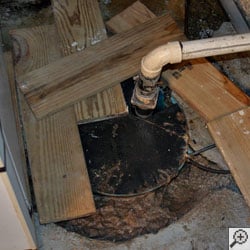 The System Is Clogged

A properly working perimeter drain system is designed to collect water from the perimeter of the basement and direct it to your sump pump. If that drain has become clogged with mud, debris, or iron ochre, then your sump pump system will have no water to pump away from your home.

These drain clogs are most common when there is a large, open gap along the floor. This gap, which is designed to collect water from the walls, can also collect debris from the basement floor.

Alternatively, the sump pump itself can clog, when large pieces of debris enter the pump. Sump pumps with filter screens will also clog over time as the filter becomes clogged with debris. 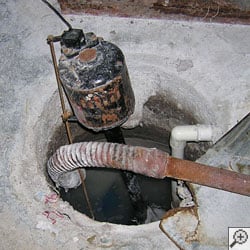 Your Sump Pump Has Burned Out

Overheating is the primary cause of mechanical failure of the sump pump itself. The motor of a sump pump creates a lot of heat. Any system that can easily disperse that heat away from it will last much longer than the alternative.

The best sump pump systems are those that can be submerged directly in water. This will allow them to be cooled by the groundwater as they pump it out.be ideal to transfer heat from the sump pump, provided that the center cylinder of the sump pump's housing is cast-iron, and not just the base.

It's also important to have a properly sized sump pit. A sump pit that's too large and too deep will force the sump pump to pump away water unnecessarily.

A sump pit that's too small will force the sump pump to turn on and off more often as the water is pumped out, which will contribute to its burning out. 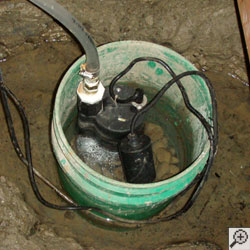 The Pump's Float Switch Has Failed

A sump pump turns on and off based on the position of its "float switch". As water rises in the sump pit, the switch will rise and fall. When it rises to a certainly level, the sump pump switches on and pumps out the water. As the float switch lowers with the water level, the system shuts off again.

Sump pump systems create vibrations as they run, and over time, they can "wander" around the sump pit. If this wandering results in the float switch being pressed against the side of the sump pit while in the "off" position, then your system will be unable to turn on.

Alternatively, some float switches are hollow, and they fill with water. A water-filled float switch may not rise as it should, resulting in a system that doesn't turn on. 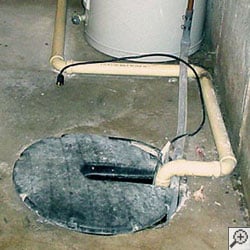 There's A Power Issue With The Pump

Sump pumps can lose power for a great number of reasons. At Basement Systems, we find that all of the following are common:

We recommend installing the primary and secondary pumps on two different circuits, and installing a long-lasting battery backup system -- like our UltraSump® Battery Backup Sump Pump.

At Basement Systems, we're proud to install cast-iron, submersible Zoeller Sump Pumps for our customers -- as well as the UltraSump® Battery Backup Sump Pump, which is capable of pumping more than 11,500 gallons of water on a single charge. We use specialized float switches that are optimized to not fail, and couple our sump pump systems with our award-winning drainage systems.

Each of our locally owned and operated Basement Systems dealers provides free, written sump pump system estimates for homeowners in their service area. Collectively, we serve throughout the United States and Canada. Your free estimate will include an on-site professional inspection, a written cost estimate, and a complimentary copy of our full-color waterproofing book. To schedule your appointment, contact us by phone or e-mail today!

Get a Free EstimateRelated Pages